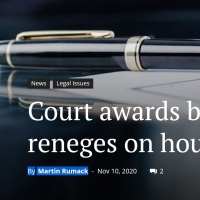 An Agreement of Purchase and Sale is just like any other legal contract: Once duly signed, it is binding and must be honoured according to its terms. If either party fails to do so, the repercussions can be costly.

In a recent case, Datta v. Eze, the seller of a home learned this principle the hard way, after the buyers sued him successfully for breach of the contract they had reached.

The agreement listed the seller of the property as Fabian, but to the knowledge of the buyers he was actually selling under a Power of Attorney granted to him by his father, who was the true owner. The buyers agreed to buy the home for $940,000, with a closing set for late September 2016.

Fabian suddenly pulled out of a deal a few weeks prior to closing. By way of a letter to the buyers, his lawyer explained that he had allegedly been “suffering from certain medical conditions which affected his mental capacity,” which in turn affected his legal capacity to sign the agreement with the buyers. The letter made no mention of any problems with the validity of the Power of Attorney.

The buyers sued for their damages arising from Fabian’s breach of their deal. Shortly after, they bought themselves a smaller, less attractive replacement property that nonetheless cost $5,000 more than what they had offered to Fabian.

In the resulting litigation, the court decried that “much of Fabian’s evidence is vague, confusing and lacked explanations on critical issues.” Although he called several witnesses, he failed to convince the court that he lacked full mental capacity at the time he signed the deal, and that he did not understand its nature and consequences. He claimed to have depression but was not seeing a doctor and was not taking medication for it. Nor did he provide the court with his OHIP records or other medical documents to prove his alleged mental illness.

The court also rejected Fabian’s late-breaking excuse that the Power of Attorney granted to him by his father had been revoked before he signed the deal with the buyers. It had been raised for the first time only long after the fact; there was nothing in writing and no other evidence to this effect. Nor could he prove that the buyers knew about the alleged revocation.

In the end, the court found the Agreement of Purchase and Sale was valid and granted the buyers an order for summary judgment (which is available when the court finds there is no genuine issue requiring a full trial). As for their damages, the amount was determined in a separate hearing, where the court noted that Fabian’s home had increased in value by $220,000, while the buyers’ replacement home increased by only $70,000. The buyers were awarded a judgment for the difference, $150,000, together with $30,000 in legal costs.

As the old saying goes, “A deal is a deal”. Once the ink is dry on an agreement, it becomes a binding and legally enforceable agreement. There are very few situations in which a signed deal can be broken, and as the ruling in Datta v. Eze shows, those involving unsubstantiated excuses are not among them.

So, whether buyer or seller, it’s vital to get good legal advice before you sign on the dotted line.

Tags: Agreement of Purchase and Sale - Power of Attorney